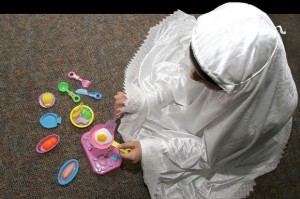 A new report from the UN has found that, in developing countries, one in five girls (19 per cent) give birth before they turn 18. Significantly, the report also found that of the 7.3 million girls who give birth every year, 2 million of them are under the age of 14. The major factors influencing the significant rate of underage pregnancies in the developing world are child marriages, community pressures and poverty, with the report stating that these pregnancies ‘are not the result of deliberate choice, but the result of an absence of choices and of circumstances beyond a girl’s control.’

This video has gone a bit viral today: It’s pretty much just a remake of the Dove Evolution clip, but anyway…

Here is yet another time-lapse clip radically exposing how images of women in magazines/advertising are completely retouched, resulting in our culture’s distorted ideals of femininity, beauty and bodily perfection. For seasoned feminists/gender-analysts it’s a bit Gender Studies 101, but if you’ve ever even slightly compared your (imperfect) body/looks/appearance to a celebrity or model in a glossy magazine (or the Big W catalogue, like I did last week: OK I admit, I’m guilty) then give this a look. But if you’ve seen Dove Evolution, probz don’t bother. Carry on.

A Saudi Arabian writer/blogger/teacher, Tariq al-Mubarak, has been detained by authorities after he published an online opinion piece supporting the campaign to reform women’s right to drive. In his article, al-Mubarak argues that extremists are denying people their civil rights and highlights the secondary status of women in Saudi Arabia.

Unwanted gay advances can no longer be used to justify murder.

New legislation proposed in New South Wales this month will mean that unwanted homosexual advances can no longer be used to justify murder. In the past lethal homicide was excused on the grounds of self-defence in light of non-violent homosexual advances. So if a dude tried to feel you up, it was totally OK to kill him. Because that’s what any ‘ordinary person’ would do. However, in most states and territories this is no longer the case, as provocation has either been abolished or restricted to only very ‘extreme’ cases, making it largely unjustified to murder and say you were provoked.