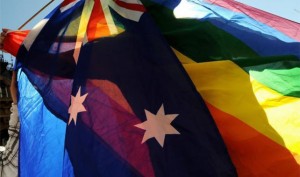 The legislation passed eight votes to seven in the single chamber Parliament. The bill’s passage was met with applause, and made the ACT so much cooler in the eyes of many.

If the bill is not overruled by  the High Court, same-sex couples from across Australia will be able to travel to the Territory to marry by the end of the year.

Deputy Chief Minister Andrew Barr, who is gay, said the law would help transform many lives and Canberra into a ‘rainbow territory’ or ‘city of love.’

‘It marks an important step in our journey to become the most LGBTI [lesbian, gay, transsexual and intersex] city in Australia,’ Mr Barr said.

Chief Minister Katy Gallagher said in an address to the ACT Parliament this morning that her government had moved to enact the law despite the threat of a High Court challenge by the Commonwealth.

‘There is no longer any excuse if there ever was to discriminate against same sex couples in our community,’ she said.

‘They are our children, our parents, our brothers, our sisters, our leaders, our business people, our mentors and our colleagues. More than anything, they are our equals.

‘The marriage equality act puts this fundamental principle and human right into law.’

One thought on “in brief: act passes same-sex marriage bill”