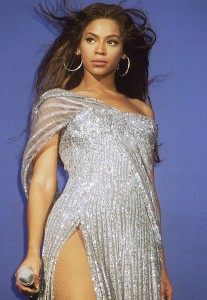 Beyoncé has attracted criticisms for her supposedly Photoshopped thigh gap on Instagram.

The singer took several snaps while golfing on holiday, with this one accused of being doctored to make her legs distinctly thinner with the clone stamp tool.

Social media was set alight with complaints and censure of the star.

‘Really, Beyoncé? We all love your thick thighs. NO reason to Photoshop a thigh gap in there,’ Twitter user @Maria Bee proclaimed.

Not gonna lie, something is strange about the picture.

But others have suggested it’s just the stance and lighting which makes for differences in the singer’s body, or weight loss from touring.

Beyoncé isn’t the only star accused of making herself look slimmer.

Kim Kardashian, Miranda Kerr, Britney Spears and the late Peaches Geldof have all had their poor image editing skills exposed by sites such as Buzz Feed.

Miranda Kerr was even pulled up on posting a Photoshopped pic with Victoria’s Secret models on Instagram, apparently without realising she wasn’t actually that thin.

Nonetheless, if the Photoshop claims are true about Beyoncé, it’s a testament to the pressures on women to present certain ‘attractive’ qualities even when their bodies are celebrated.