in brief: keep calm and rape them t-shirts cause uproar 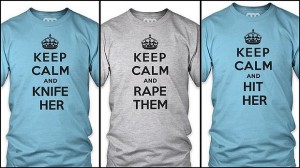 A series of t-shirts have been withdrawn from sale online at Amazon.com after consumer outrage over their apparent glorification and support of sexual and physical assault.

The t-shirts were listed for sale by the Australian founded company Solid Gold Bomb, who saw a market for the ‘keep calm’ trend and created a computer based three-line script algorithm designed to automatically generate phrases for the shirts.

‘As the volume of combinations of words/slogans/styles/colours/sizes are well into the millions, a volume of computers were used to do this entirely in a cloud type environment’, he says.

‘The problem was certainly the fact that certain words both individually and in combination were or became offensive’, says Fowler.

‘No words can express how I feel about what has occurred and in no way do I condone or promote this serious issue’, he wrote in a public apology featured on the home page of his website.

Fowler says they are currently working to delete the entire parody series while their listings are down.

One thought on “in brief: keep calm and rape them t-shirts cause uproar”