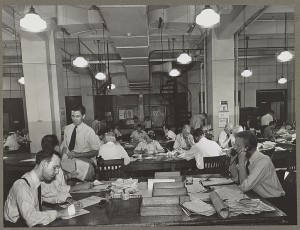 A study by the US Women’s Media Centre (WMC) has found the majority of print, broadcast, internet and wires content is produced by male journalists.

The WMC surveyed 27,000 articles, bulletins and the like to find across all platforms 63.4 per cent was man-made.

News anchor positions are mainly held by men with the exception of commercial network ABC and the nation’s only public broadcaster PBS, where the trend is reversed.

Bylines for articles are, again, mainly male in print, but online the Huffington Post and CNN maintained an almost even ratio of articles submitted by women and men.

Stories are also gendered in the way news directors and editors assign them, with women more likely to report on lifestyle, health and education pieces as opposed to sport, politics or crime.

The news media inequalities are part of a broader trend of male dominance in film, gaming and other media sectors.

‘Only when women are equal partners in the multi-layered work of deciding what constitutes a story and how that story might be told can we paint a more textured, accurate picture of the worlds that we all — male and female — inhabit,’ she writes in the report’s introduction.