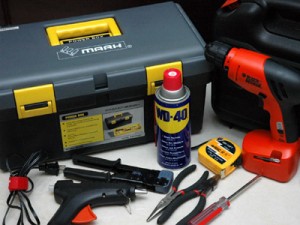 A new survey conducted by WD Bathrooms, found that more women are embracing DIY around the house, spending the money and the time to fix things without the aid of their male partner.

WD Bathrooms questioned 1,244 British women about their DIY habits and, according to the Daily Mail, women are taking a bigger role in home improvement projects for a variety of reasons, including the increase in women homeowners.

The most common answer among women when asked why they had taken up DIY was that, ‘it was the only way to get anything done.’ While 4 in 10 women said they wanted to stop asking their brothers, fathers and male friends for assistance, 10 per cent said they took up DIY to increase the value of their home, inspired by TV home improvement programmes.

Like Rebecca Rose over at Jezebel, I’m feeling a bit more like rolling my eyes than shrieking in amazement over this news.

Haven’t we surpassed the time for these kinds of surveys? It feels like a hark back to the days when it was a surprise if a woman would pick up a hammer and decide to do some DIY work around the house, instead of standing in the kitchen and cooking dinner. As in, the 1940s.

I’m sure there are plenty of women all around Australia who love nothing more than to shop at Bunnings or Masters and fix things in their own homes on the weekend. I am my family’s resident Ikea flat-pack furniture assembler – and I love it! Maybe WD Bathrooms, and the Daily Mail for that matter, should come and interview Australian women about their DIY habits.

Rather than finding “new” information about women’s DIY habits, they’d find it’s the same as it has been for years now: women can in fact use tools and fix things in their own houses. Wow!

Are you amazed by these findings, Lipsters?
Share your DIY views with us in the comments!