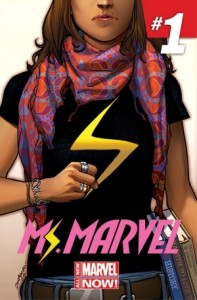 Marvel, the US comic book giant behind Spiderman, The Hulk and Captain America, are bringing back 1960s heroine, Ms Marvel. But rather than the tall, blonde air force officer, her new persona will be a 16-year-old Muslim girl from New Jersey.

Ms Marvel’s new alter ego, Kamala Khan, is a high school student living with her Pakistani parents. She has the ability to grow and shrink different parts of her body and shape shift into other forms. Khan is the first Muslim character to have a lead in Marvel comics.

The monthly comic will debut in February. Marvel’s editor-in-chief, Axel Alonso, describes the new heroine as ‘just a 16 year old girl, exploring the many facets of her identity as she is suddenly bestowed with superhuman powers that send her on the adventure of a lifetime.’

The lead writer of the series, G Willow Wilson, is an American woman who converted to Islam. She has written several comic books as well as articles on modern religion. Wilson says that she drew from her own experiences as a teenager. Through this, Ms Marvel will be ‘true to life,’ and relatable to young women.

It is hoped that the new comics will debunk the stereotypes surrounding Islam. Ms Marvel’s editor, Sana Amanat, told The Associated Press that the series stems from a ‘desire to explore the Muslim American diaspora from an authentic perspective.’

The new Ms Marvel follows the footsteps of a growing trend of Muslim superheroes, such as The Burqa Avenger, a Pakistani cartoon about a schoolteacher who fights corrupt politicians who deny education to young girls.

Fatemeh Fakhraie, the founder of Muslimah Media Watch, says the new Ms Marvel will provide ‘a window into the American Muslim experience.’

‘It’s for all the geek girls out there, and everybody else who’s ever looked at life from the fringe.’