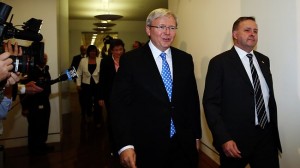 Image via The Australian

Kevin Rudd has defeated Julia Gillard 57-45 in a dramatic Labor leadership ballot overnight. Rudd was sworn in as the 28th Prime Minister of Australia this morning.

The result comes nearly three years exactly since Gillard replaced Rudd as PM in a leadership spill. Gillard has vowed to retire from politics and will not re-contest the seat of Lalor in the next election. In an address to the nation last night, she joked that her heavily pregnant niece was about to get the most meddlesome aunt in history.

Mr Rudd thanked Ms Gillard for her work as prime minister, praising her as a ‘woman of extraordinary intelligence, great strength, and great energy’.

‘I know that it can be done. And I also say to my caucus colleagues that that will best be done by us putting the divisions of the past behind us, and uniting as a political party, making sure we put our best face forward at the forthcoming election campaign, and in the years beyond’.

The new election date is yet to be confirmed.

One thought on “in brief: Kevin Rudd replaces Julia Gillard as Prime Minister”