in brief: tony abbott refers to gay marriage as ‘the fashion of the moment’ 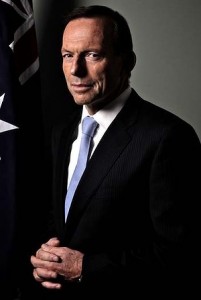 Tony Abbott has continued into a third day of cringe-inducing foot-in-mouth, referring to same-sex marriage as ‘the fashion of the moment.’

In an interview with John Laws, Abbott spoke about his personal conviction that marriage is between a man and a woman.

During the interview, Abbott justified his position by associating it with ‘tradition.’

‘We have to be conscious of the fact that we are all the products of the society, of the culture, of the circumstances that have shaped us,’ he said.

‘I’m not saying that our culture, our traditions are perfect, but we have to respect them and my idea is to build on the strength of our society and I support, by and large, evolutionary change.

‘I’m not someone who wants to see radical change based on the fashion of the moment.’

Labor supporters condemned the statement, using it to illustrate their belief that Abbott is old-fashioned and out of touch.

Deputy Prime Minister Anthony Albanese said Mr Abbott was out of touch with modern Australia, saying the description of sexual orientation as a fashion statement would be deeply offensive to many people.

Finance Minister Penny Wong, who is in a long-term same-sex relationship, tweeted: ‘Note to Mr Abbott: Equality is not a fashion item.’

‘This campaign is now going to be about a choice between a 20th century man [Abbott] and the future [Rudd],’ a senior ALP strategist said.

Yesterday, Abbott drew criticism for saying a female Liberal candidate had ‘sex appeal’. Earlier in the week, he confused the words ‘repository’ and ‘suppository.’

One thought on “in brief: tony abbott refers to gay marriage as ‘the fashion of the moment’”