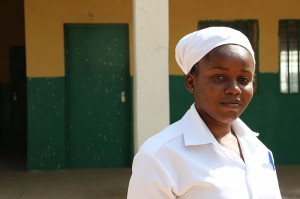 April 14. I was probably studying on April 14. I was probably complaining about the amount of study I was doing on April 14, taking for granted my privileged education that has made me a better analyser, empathiser, and questioner. Almost 300 girls between 14 and 18 were sitting their exams on April 13 in their secondary school in the village of Chibok, north-east Nigeria. These girls were kidnapped the following morning when extremist group, Boko Haram, invaded their school and forced them to break away from one of the most empowering things on this planet– their education.

They were threatened with death if they did not go. Their school was burnt down. Girls who managed to escape the attack have said that Boko Haram came into their school under the guise of soldiers who were there to protect them from insurgents, leading them into a false sense of security before they were kidnapped. Last Tuesday, residents of another village in remote north-east Nigeria said another eight girls were captured by suspected members of Boko Haram.

Boko Haram’s leader, Abubakar Shekau, has taken responsibility for their kidnapping. He has threatened to sell them into slavery, into marriage. ‘I will sell them off. There is a market for selling girls.’ Shekau says in a flippant video glorifying his actions. Shekau is against Western education. It is clear that he believes girls have no place within a classroom nor should they have any other human right. Boko Haram has killed more than 1500 people just this year in their mission to undermine Western education and anyone who opposes their warped interpretation of the ideology of Islam. You can read more about Boko Haram’s history here.

However, Nigeria has been facing extremist and human rights issues for plenty of years, and not just by extremist groups. Military officials and police have been accused of being involved in crimes against humanity and Nigeria’s government has had a poor human rights track record. But as more and more Western ears prick up to this latest act of brutality (including governments, celebrities and even Pope Francis), Nigerian president Goodluck Jonathan and other government officials have promised to bring the abducted girls home. Despite Boko Haram’s dominating stance in Nigeria at the moment and Jonathan’s lack of knowledge on the girls’ whereabouts, Jonathan has stated that he believes the kidnapping of these girls will be ‘[the] beginning of the end of terrorism in Nigeria.’

American military experts as well as some French and British teams have finally arrived in Nigeria to aid the government in their rescue of the girls. Jonathan believes the girls have not crossed any borders. Still reports from United States intelligence have suggested that the girls may have split into groups and been dragged across to neighbouring countries like Chad, Cameroon and Niger, making the search and rescue operation an even harder task.

Bring Back our Girls campaign coordinator, Hadiza Bala Usman, has stated that these attacks on school children by Boko Haram are recurring, citing the Buni Yadi attack where girls were abducted and at least 50 boys were massacred by Boko Haram. ‘It’s part of their strategy of weakening the society, of destroying our society’ Usman said.

Suspicions have also been aroused due to the Nigerian government’s slow response to accept help. Moreover, Amnesty International has released information collected from credible sources stating that Nigerian security forces had more than four hours of warning about the attack on the school and yet did not do enough to hinder it. In light of this new information, and every fleeting day, the hope of these girls returning to their homes, their families, and their education seems more unlikely as is the chance of them returning unscathed mentally and physically.

It is still not known precisely how many girls were callously kidnapped by Boko Haram. Authorities can only speculate that 276 girls are missing. No faces or names have been put to these almost 300 kidnapped girls, although for the sake of their family’s safety and their well being this is probably for the best. It is still not known if these girls had dreams beyond what Boko Haram says they should have dreams about. Some might have wanted to be doctors, engineers. Some might have wanted to work with an NGO and help fight against exactly what they were taken for. The only thing known is that they need to be found, they need to be freed and the aftermath of their trauma needs to be looked at and dealt with.

Currently, almost two thirds of adults who are illiterate are women, and 31 million girls are not in school. You can do your part to help by supporting and promoting the education of girls. You can demand action from the Australian government and ask them to keep the pressure on the Nigerian government to find these girls. You can donate to organisations that promote and stand up for girls’ rights to education.