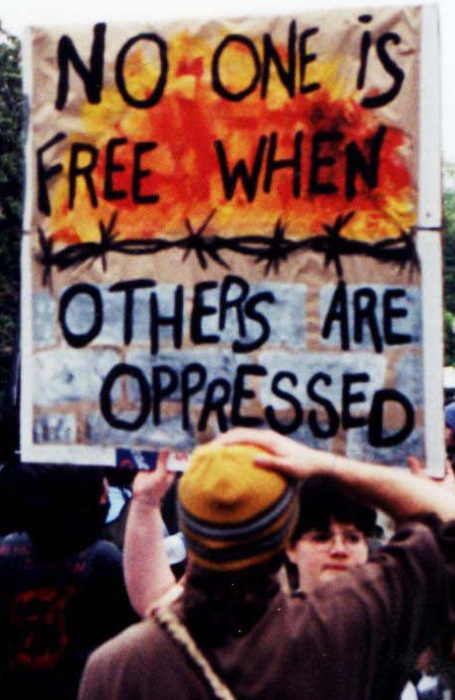 As a movement, and speaking in very general terms, feminism has been guilty of marginalising the voices of other people. While it has been rejected on ignorant grounds which rely on stereotypes (feminists are hairy, scary people who hate men and burn undergarments), it has also been quite fairly rejected on the grounds that it lacks inclusion and diversity.

This may sound bizarre to some readers. After all, in times where even the likes of Sarah Palin can declare herself a feminist, the word ‘feminism’ is sometimes charged with encompassing a too broad a spectrum of people, and some suggest that perhaps we ought to police who uses the term a little better (or not).

But in another way, the feminist movement has been guilty of marginalising voices that are already marginal. This is probably not as big a problem now as it has been in the past, but certainly at some stages in history, feminism was ultimately a movement for white, educated, able-bodied,upper-class women to gain rights, while the rights of other kinds of women, or people of other genders who experience subjugation were cast aside.

To really understand the way feminism might be broadly used, or the way in which different people may adopt different feminisms in the quest for further rights and social equality, it is crucial to understand the concept of intersectionality.

Feminists understand that by and large the experiences of women are disparate from the experiences of men. What this means is that men enjoy certain privileges over women. For instance, if I am a man, I enjoy the privilege of not being subjected to sexual harassment very often (if at all); the privilege that if I choose not to have children, this won’t put my masculinity into question; the privilege of having lots of people in the news and in history books who represent my gender; etc. (there is a big ‘male privilege checklist‘ you can read). The umbrella term for all of these (often subtle) privileges that men enjoy is ‘male privilege’.

Finally Feminism 101 defines privilege to be ‘about how society accommodates you. It’s about advantages you have that you think are normal. It’s about you being normal, and others being the deviation from normal.’

Obviously this is a huge generalisation, but it is a helpful example for the purposes of illustrating the concept. It is also important to note that if you have privilege, it isn’t your fault. Instead, it points out that if someone has reported feeling uncomfortable or undermined in a certain situation and you think they might be overreacting, it might be best just to give them the benefit of the doubt. It may just be that you are blind to what they are experiencing. It is also important to note that if you really listen to people who don’t have privilege, you may be able to see what it is they’re talking about yourself, though you may not ever experience it first-hand. In short, countering privilege is all about empathy, and the very basic adage of attempting to walk a mile in someone else’s shoes.

This is where the concept of intersectionality can be helpful for feminism, especially to feminists who want to support the rights of different marginal groups and who want acknowledge the fact that we all, in some way, retain certain privileges that others don’t enjoy. Intersectionality is basically the idea that social inequalities are multi-dimensional – it is not necessarily about just gender, but actually about a whole range of factors and experiences.

By being aware of the range of inequalities that exist, feminism can become more inclusive and helpful to a larger range of people. The reason why ‘feminisms’, a plural word, may be productive is because it brings to our awareness that not all women are the same, and their priorities are going to differ from each other. But more profoundly, the feminist movement cannot be understood as something that helps women unless it helps all women, regardless of their race, sexuality, socio-economic status, appearance, their level of ability, whether they have female genitalia, where they live – regardless of anything.