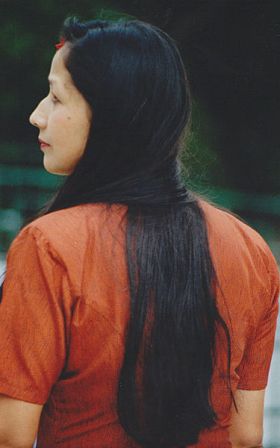 Rapunzel fashioned it into a handy grappling cable. Mary Magdalene used it to wash the feet of Jesus. Clearly, hair is among the most versatile parts of the human body and because of this, it is oft imbued with a myriad of socio-cultural meanings.

In 1957, anthropologist E.R Leach published an essay entitled ‘Magical Hair,’ in which he explores the findings of Freudian anthropologist, Charles Berg, who claimed that hair is a site of rich symbolism in all cultures. According to Berg, in many cultures, hair is symbolically linked to sex, gender and sexuality. Leach made the interesting observation that long hair is often seen as symbolic of unrestrained sexuality, hence why monks and even some nuns, shave their heads to symbolise their chastity.

In 1974, P. Hershman studied hair rituals in Punjab, India, finding that rituals around fashioning hair were deeply imbued by gendered cultural norms. For example, women believe that the longer their head hair, the more sexually desirable they are to men. However, Punjabi women experience the most taboos around hair rituals. Traditionally, women are only allowed to wash or untie their long hair on particular days in order to avoid superstitions. Hair plays a major role in the ritual life of Punjabi women, being untied and washed after periods of ritual impurity (menstruation, sex, childbirth, the death of a husband).

In traditional Punjabi belief, women’s hair is also associated with magic and sorcery. It is believed that a sorceress can kill a child and capture its spirit for her barren womb if she throws the dirty water from her wet hair over the child. Because women are seen as “more impure” and “closer to nature” than men, their long hair is thus symbolic of their animal sexuality, which must be tamed by social control.

But what about in Western culture? It seems somewhat paradoxical to associate long hair with sexual potency, when it is part and parcel of heteronormative, ideal femininity. The fairy-princess feminine archetype that haunts the socialisation of every girl is predicated on flowing, long and preferably blonde hair. Can we say that this is symbolic of women’s underlying sexual power?

Long hair is so entrenched in patriarchal ideals of femininity that the cutting of a woman’s long hair is seen as a drastic move. Even sacrilege. We saw this in the public discourse and uproar when Beyonce famously cut her trademark diva locks (after getting them horribly caught in a fan mid-performance!). This public outrage has repeated itself with Pamela Anderson, Jennifer Hudson, Anne Hathaway and most recently, Jennifer Lawrence. But what does it all mean?

Some feminist discourse has positioned the cutting of long hair as a mark of liberation. The flappers of the roaring ’20s shocked the world with their slimline dresses and bobbed hair. In the ’70s, feminists like Susan Brownmiller and Germaine Greer advocated for women to cut their hair short and no longer have to bother with the travails of hairstyling.

Brownmiller claimed that it is the men in women’s lives who object to the cutting of their hair. I can’t help but recall my Dad’s dismay when I cut my hair into a bob for the first time at age 10. It did not directly influence my decisions (my body, my choice, right?) but alas, here I am today with black, tangled hair that drapes down my thighs like something from a Japanese horror film.

But get to a certain age and this all changes. Think of a stereotypical granny. Does she have a blue rinse and tight little cropped curls? According to Ward and Holland’s 2011 study of hair, aging and body-image, older women often feel pressured to cut their hair, to conform to society’s notions of what “nice” older women are like. Older women with long hair, especially if it is grey, bring up too many witch/crone connotations. My mum was recently told by a (male) psychologist that she should cut her waist length hair in order to act and be treated more her age. Similarly, at a family gathering I was once asked by an older male relative when I was going to ‘grow up and cut my hair’.

So, far from symbolising sexual potency, Western women’s long hair can be seen as symbolic of age-old, heteronormative, patriarchal ideas that women are “closer to nature” than men. But perhaps next time my uncle tries to infantilise me by calling my crowning glory girlish, I will inform him that according to Freudian theory long hair symbolises my unrestrained, devouring sexuality. I think that will go down well.