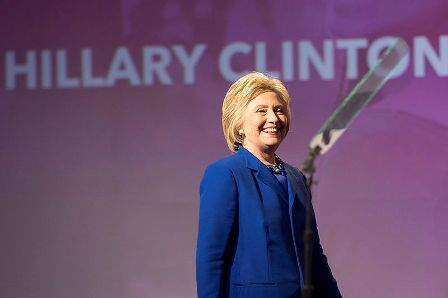 It is with a heavy heart I write you. In the days since the election, I’ve grieved with much of the international community. The outcome of this election has left many scared for what the future holds, especially for women and minorities. I cannot tell you how much I wish this were a letter of congratulations.

Still, in the midst of the shock and confusion, I wanted to take a moment to thank you.

Thank you. A million times over. I could never say it enough.

I am in awe of your resilience and strength in the face of sexism and intense media scrutiny. Thank you for your lifetime of public service, for your grace and encouragement shown in your concession speech and in the days since the election.

Throughout my adolescence, you were a personal hero. You once famously said that ‘women’s rights are human rights’. Your work only reinforced that belief. You have prioritised paid family leave, championed women’s reproductive rights and equal pay. During your time in the Senate, you fought hard to make contraception available over the counter.

Your example has instilled in me a desire to make a difference in the world. Progress is slow, but always possible. Thank you for advocating for positive change. You have shown me the world’s great potential and further inspired me to fight for it.

You visited Australia in 2010 as Secretary of State. I remember watching you address a group of young people at the University of Melbourne; you answered their questions and listened to what they had to say. These young people weren’t your constituents or potential future voters, but your dedication to change was such that you heard their concerns all the same.

You have always been a team player. Following the 2008 primaries you not only went on to campaign for Barack Obama, but you put pride aside and went on to serve in his cabinet. You have gone above and beyond for your country. The Bush Administration had damaged America’s reputation abroad. Under your guidance, the State Department made women’s rights a departmental priority, restored relationships within the European Union and increased trade with China.

I cannot even begin to fathom how you much you have endured over the last 18 months. I’ve followed your campaign from day one. Your calm and composure in the face of an abusive, racist, sexist bully was nothing short of superhuman. Even when faced with low blows during the debates, you sought to ‘go high’.

Even in your concession speech, you implored us not to give up; to continue to fight the good fight.

Thank you for leading by example, for admitting your faults and apologising when you were in the wrong.

Thank you for fighting to make the rights of the LGBTQ+ , immigrants and people of colour a priority through your proposed policies. Throughout your campaign, you met with activists and listened to the needs of these people. You grieved with the LGBTQ+ community and the families of the Pulse nightclub shooting.

Thank you for showing me that a brilliant, fearless woman can take on the world. In following your example I have pushed myself harder, taken more risks and opened my mind to new opportunities.

Thank you for taking a male-dominated, often backwards world of politics and making it your own. You are a woman I will tell my future daughters about.

You’re right: we’re stronger together. Even in these uncertain and scary times, we can still push for positive change. Now, more than ever, we have to fight the good fight.

Yours Sincerely,
A fellow Nasty Woman