do we need anti-rape laws, or just anti-rape underwear? 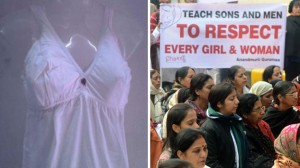 In a response to the December 2012 gang rape of a medical student in India, which sparked huge protests and a call to the Indian government to address the growing issue of sexual assault and violence against women in the nation, three engineering students from SRM University in Chennai have come up with what they think is the solution.

The students, two of whom are women, have invented ‘anti-rape underwear’ that will administer an electric shock to potential rapists, whilst simultaneously sending an alert to the victim’s family and police that they are in danger with GPS tracking information.

The shock is administered through an electrode located in the bra region, which apparently has been proven as the first point of contact from sexual assaulters. The woman is protected by a polymer lining to the garment.

Co-creator, Manisha Mohan has said to The Times India  ‘The shocks can be emitted up to 82 times. This could give women freedom from situations faced in public places’.

Hmmm, I’m not so sure about that. ‘Freedom’ to me doesn’t come in the form of electric underwear, that will probably just enrage my attacker more and potentially lead to even more grievous harm for me.

Whilst I understand the frustration that probably led to the invention of the anti-rape underwear, much like the anti-rape condom, I fail to see how it could make any real impact in a rape scenario. Unlike a rape whistle or alarm, which can at least be used to attract attention of passers-by, if an attacker is close enough to grope you, I don’t think zapping them is going to make a huge difference.

Worse than that, devices like this act as a distraction from the real issue around sexual assault – that Government legislation needs to be more effective, and police response needs to be reliable and immediate; that streets need to be safer, and penalties for sexual assault crimes need to be harsh with higher conviction rates; that a cultural shift has to occur in India to change the way women’s bodies and sexuality are regarded, and to change the way rape is seen as an almost inevitable part of daily life.

The fact that Mohan refers to sexual assault as a ‘situation faced in public places’ is disturbing in itself – rape should not be an expected aspect of entering a public place. And women should not be arming themselves with electric underwear to ward of rapists.

Unlike empowering methods of arming oneself against assault, such as self-defense classes, anti-rape underwear implies a kind of resignation to rape that I can’t quite agree with. I guess some would argue that women are arming themselves in a realistic way through the use of a device like this, but the idea of having no defense until I am actually being groped would not make me feel particularly safe.

The issue of sexual assault in India is a huge one, and I certainly don’t know where the solution will lie, or how the culture will change in the near future.

But I would rather that the focus was on governmental response and real societal action, than anti-rape devices that once again put the impetus in the victim’s hands to prevent rape, rather than the rapist’s.

What do you think? Is this a good thing for women, or a step backwards?

2 thoughts on “do we need anti-rape laws, or just anti-rape underwear?”