‘flaps and all’: censoring Honi Soit 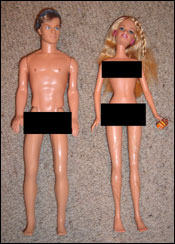 Fans of The Mighty Boosh will remember how strange it is to see a grown adult with no genitalia (Naboo, anyone?). Flat down there, like a Ken or Barbie doll. But this isn’t actually that far from the images shown in the mainstream media in Australia.

This week, Sydney University student press Honi Soit caused controversy when it featured images of 18 real students’ real va-jay-jays, ‘flaps and all,’ on its cover, as a protest against the inaccurate depiction of vulvas in the media. However, due to the afore-mentioned laws (which heroically stop innocent children possibly being traumatised by chancing upon a hideous, obscene, REALISTIC vulva) Honi Soit was advised by the SRC to censor the cover. When this didn’t go so well and those pesky innies were still poking through the protective black shields, all the editions were seized for the covers to be removed.

Honi Soit editor-in-chief stated that ‘the idea that the vagina, a body part that half the population have, can still be considered offensive or indecent is the very idea our paper was challenging. The cover was meant to be an empowering message to women that they don’t need to be ashamed of their bodies.’

What’s with this public fear and loathing of vulvas/vaginas/labia? For a culture that loves to sexualise women from a younger and younger age, it may seem jarring to simultaneously censor and recoil from the bits women actually do the sex with. On a trip to the Museum of Old and New Art (MONA) in Hobart when the infamous ‘wall of vaginas’ was still on display, the two heterosexually identified men I went with shuddered and made vomiting noises all the way past the one hundred and something plaster casts of vulvas. Especially the ones with protruding inner labia. This, coupled with founder/owner/local-legend/tycoon David Walsh’s comments in the visitor information that read something along the lines of  ‘let’s face it, c*nts are gross!’ really highlighted the strange way that the mainstream/‘malestream’ loves/hates our bits.

This strange phenomenon where (some) men recoil in disgust from the real, live vulva/vagina in its literal and existential messiness, yet still don’t mind putting their dicks in them confounds me.