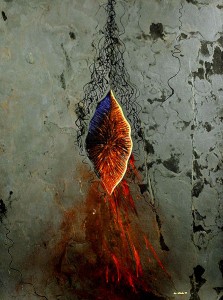 The latest trend that’s been heating up Twitter, blogs and online articles alike is something called ‘free bleeding.’ It’s a ‘disturbing new trend … in which a woman who is menstruating chooses to use feminine products no longer, in exchange for allowing her blood to flow “freely” out of her body, staining her clothing and running down her thighs to wherever it may end up.’

Yeah, that’s right. I did not stutter there.

There are apparently ‘two ideas behind’ the trend. The first of which is that a woman’s time of the month ‘should not be considered something unclean and unnatural, something to be hidden and cleaned up hastily.’ Secondly, feminine hygiene products oppress us as women because they are ‘man made inventions [which further our] victim status as a woman living in a world by men.’

Indeed, men did play a big part in the invention of modern-day menstrual products. The first known product was called a ‘womb veil’ and was invented thanks to ‘Charles Goodyear who invented the technology to vulcanize rubber’ in 1839. Later, the Johnson & Johnson Company made the ‘first commercial sanitary pads … named for Joseph Lister, a pioneer in sterile surgery.’ Dr Earle Haas filed ‘for a tampon patent’ in 1931 and his ‘tube-within-a-tube design [is] still used today.’ However, women were also involved – WW2 nurses in France started using bandages they were applying to wounded soldiers ‘for their own flow’ because the bandages ‘absorbed blood much better than plain old cotton.’ And in 1933, Gertrude Tendrich was actually the first person to purchase a patent for a tampon, out-doing Dr. Haas and even using his ‘compression machine’ to make ‘tampons at home.’

But back to modern times.

Adora Bull, who has written probably the best article on the subject of free bleeding (more about that in a bit) goes on to say that ‘by letting it run freely, is the way nature intended us to deal with our’ monthly cycle, but ‘for any normal woman, however, this idea is horrifying.’ Her article goes on to criticise the movement and it’s association with feminism. She worries that if this is indeed something feminists want women to do then their ‘true motive is to set the progress of our species backwards, not forward.’ She urges her readers to ‘disregard and reject this new hardcore feminist trend, both for your own health and the health of those around you.’

Agreed, Ms. Bull. Yet, there is one problem. Free bleeding is not actually a huge trend. It’s a concept that has been around ‘online since the early 2000s’ and was first discussed then by a ‘women’s reproductive health blog. ‘In February 2014 [it was] promoted by members of 4chan as a prank to convince women that feminine hygiene products were a form of patriarchal oppression.’ What is 4chan, you ask? Well, they are home to what Foxnews calls ‘the most powerful people on the internet,’ all of whom ‘lack a social conscience’ and are the makers of such memes as LOLCATS and Hamster Dance. They are a group of guys who claim that their blog is ‘a place beyond sanity, wild and untamed.’ And they’ve launched ‘a couple silly hashtag trends’ in order to ‘manufacture enough fake social media outrage over the use of sanitary pads that news and organizations and feminists fall for it.’

So how about that for patriarchal oppression?

Free bleeding is actually real. You can do a little bit of research to find that out. It’s a topic of a few feminine hygiene and health blogs, and is stated as something that you can deal with ‘if you have a light enough flow to not really need anything.’ But it’s not something a huge bandwagon of feminists has jumped onto. It’s just a prank, and one that has gotten women and men alike all fired up.

That leads me onto my final point, which if I daresay myself, may turn into a bit of a rant. (You were warned.)

Gary Demar has written a response to Adora Bull’s article, titled ‘Crazy Feminists Want Their “Period” to Bleed “Freely” and Feminize Wikipedia.’ He blatantly ignores what Bull is actually trying to say, which is that calling free bleeding ‘natural’ is actually ridiculous and goes on to say ‘What’s “natural” is not always a sought after normative state for humans. We were born into this world naked. Should we shun clothing’? And then finishes off his piece stating ‘Consistent feminism is impossible. The only way these new trends will gain cultural traction is by the force of law. That’s what scares me.’

So, to sum it all up, don’t initially believe anything you read on the internet – especially if it’s going around saying that feminists believe in something that a group of male hackers have placed onto the internet to prank all of us. That’s just all sorts of wrong. I’m going to go back to normal life now, I’m going to go bleed and clean up after myself as I please and not let anyone in the world tell me how or why I should do it. And that’s how I think we as feminists can stick it to ‘the man’ and take control of what happens to us every month. Choose to free bleed, choose to use tampons, choose whatever is right for you.