in brief: feminism a threat to russia 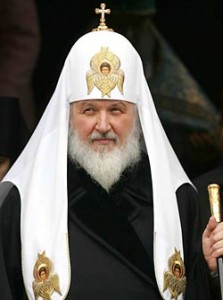 The head of the Russian Orthodox Church has claimed that feminism could destroy Russia.

On Tuesday last week, Patriarch Kirill denounced feminism as ‘very dangerous’ and a form of ‘pseudo-freedom’.

He explained that feminism was threatening the fabric of Russian society because it ‘must appear outside of marriage and outside of the family’.

‘Man has his gaze turned outward – he must work, make money – and woman must be focused inwards, where her children are, where her home is,’ he said.

‘If this incredibly important function of women is destroyed then everything will be destroyed – the family and, if you wish, the motherland.

‘It’s not for nothing that we call Russia the motherland.’

Patriarch Kirill is a vocal supporter of Vladimir Putin and once said that the group Pussy Riot were ‘doing the work of Satan’. He made the most recent controversial remarks while speaking at a meeting of orthodox women in Moscow.

His views form a backdrop to Russian society, where women’s rights are not part of the political agenda. Recently, Putin has made boosting Russia’s population a key priority for his administration – reinforcing the idea that a woman’s first responsibility is to raise children.

Around 75 per cent of the Russian population identifies as Russian Orthodox.

One thought on “in brief: feminism a threat to russia”