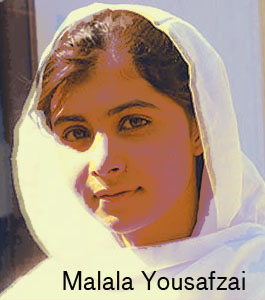 On 13 July 2013, Pakistani schoolgirl Malala Yousafzai delivered a speech to the United Nations (UN) on behalf of ‘every woman.’ Standing up against the Taliban and Islamic Extremists, Malala asserted that all women and children should have equal rights and access to free education. But not only did her speech reach the heart of all feminist-minded women, her courage should stand as an inspiration to us all.

Despite having been shot in the head by terrorists after her advocacy for women’s educational rights in October 2012, Malala’s activism has not been silenced. She stood proud in front of the UN audience of more than 500 and asserted: ‘On the 9th of October 2012, the Taliban shot me on the left side of my forehead. They shot my friends too. They thought that the bullets would silence us. But they failed.’

Malala spoke about how ‘young girls have to do domestic child labour and are forced to get married at an early age.’ She emphasised that in Pakistan and elsewhere, traditional gender roles are still the norm; and she argued for the right of women to fulfill their potential outside of the domestic sphere and the home. She advocated mainly for women’s rights and education. She said that ‘they are suffering the most.’

Standing strong for women’s rights in the face of hurdles and dangers, she is an inspiration to us all; a lived embodiment of the feminist movement in the 21st Century.

In contrast to women in Australia who now experience the rights and freedom allowed by the achievements of the feminist movements, including the right to participate in education and the workplace to the same extent as men, many women overseas are often denied this opportunity and are not allowed such personal autonomy. Having not been empowered by the same legislations of Australia, such as the ‘Equal Pay for Equal Rights’ of 1986 and ‘Family Law Act’ of 1975, women in countries like Pakistan suffer burdens not dissimilar to those of the women of our past. She is fighting for rights of women that have not yet been achieved, and in the name of the ‘Sisterhood’ we should support her!

While the sisterhood of feminism has received extensive criticism in its recent past, and feminism to a large extent has been argued to have become obsolete, I believe that its principles are still important. We should not step back just because some of us have achieved desired rights. We need to be supporting activism of less privileged women to achieve the same rights that we have in the West.

So as privileged women in another part of the globe, we should support Malala and others who stand up for women’s rights and education and freedom. Malala has reminded us all that equality between men and women has not been achieved. She reminds us that feminism is not, and should not be dead.

In her speech, Malala asked women to ‘pick up our books and pens.’ She said that ‘they are our most powerful weapons.’ She believes that women can be empowered through education, writing and knowledge. So it is in the legacy of her speech that I write this piece. Malala’s speech implied that it is the global sisterhood of women that must stand together for equality to be achieved. And to not undermine the boldness and courage of her speech we should stand together and support women’s rights and freedoms. We should keep reminding ourselves that equality has not been achieved, and that feminism is certainly not obsolete.