side by side: why retreating from AFL is not the answer

Side by Side is Danielle Croci’s new fortnightly sport column. This is the first instalment. Be sure to check in with Lip regularly to get more of Danielle’s insights on gender issues in games and fitness – across varying codes and abilities. 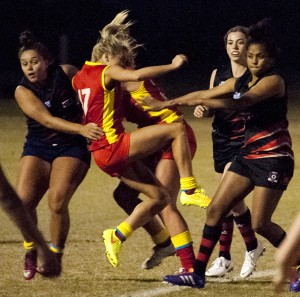 ‘To my horror, my six-year-old daughter recently announced that she’d like to watch AFL.’

Kasey Edwards recently wrote for Daily Life that she didn’t want her daughter to become an AFL fan because it is the ‘pinnacle of Australia’s glorification of all things male’. She argued that women footballers will never be taken as seriously as men, and that the AFL makes women unwelcome in every position other than as objects or male support. Edwards asks why any mother would want her daughter to be involved in such an industry, even as a fan.

Not surprisingly, this article touched a nerve online.  While many agreed with Edwards’ appraisal of Australian Rules as a far from comfortable environment for women, there was a reaction against the idea of retreating from the sport as a result. And, as a woman and a diehard AFL fan, I have to agree.

It’s incredibly fatalistic to suggest that we should give up the sport simply because it has sexist elements. Imagine if every time the feminist movement faced an obstacle, it simply backed off. The movement wouldn’t exist. Writer Erin Riley made a fantastic response to this article for SBS Zela, noting that the alternative is to ‘choose to fight’ – to challenge the patriarchal society and fight for what we care about. How can we make change if we withdraw from the very place that requires it?

Let’s face it, the idea of rolling over and letting men have something that gives a lot of women joy, including myself, makes me livid. In fact, 40% of all AFL club members are women, a relatively high number compared to other sports like soccer and rugby league. Is all of their passion for the game in vain because of some of the treatment they receive?

Edwards talks about the ‘boys club’ of the AFL that has been sluggish at best to take action on sexual assault and can treat women of the game, from journalists to runners, with downright contempt. Sadly, this is all too true and it’s understandable that a parent would want to shield their daughter from such an industry. However, it’s hard enough having to deal with the misogyny of elements of the AFL and its supporters, but add the disdain of some members of the sisterhood and it becomes almost unbearable. Women who consider themselves feminists as well as devoted sports fans can find themselves torn between the game that has been a huge part of their life and their progressive values.

Some feminists believe that sport is inherently oppressive for women. Although rather dated, I recall an article by Lois Bryson from the 1980s on ‘sport and the oppression of women’ that expressed this idea. Bryson suggested that sport supports male dominance in wider society, not just within the industry, as well as their monopoly on aggression. Sure, it’s a fascinating sociological concept and the implications of male aggression within sport need to be considered. However, it feels futile to use it as a means to steer women away from the sport, especially considering the widespread popularity of AFL.

Others hold the inherently classist notion that people who enjoy sport are inferior. Surely sport fans are only choosing to watch meatheads kick a ball around because they can’t get their heads around intellectual ideas, right?

Or there’s the insidious notion that seems to creep in that women who enjoy sport are doing it to impress men. The implication is sadly not limited to gross men who want to out women and girls as ‘fake fans’. Often well-meaning women can suggest that the only reason a woman would be interested in AFL would be to impress a potential love interest – ‘don’t worry, you don’t need to pretend to enjoy it’. This not only panders to the idea that sport is for men, but suggests that women behave based on what men want.

At the risk of being a bit depressing, the very real issues that Edwards notes about women in AFL – from its lack of support for the women who play to its record on sexual assault – are all visible in not only other sports, but wider society.  Yes, women’s soccer has semi-professional leagues and fan bases, but they’re still treated poorly, as we’ve seen recently with the US women’s team filing a federal wage discrimination complaint. In February, I wrote about the new Australian laws attempting to minimise travel allowance discrepancies for men’s and women’s sport, which highlighted how far we still have to go. On the trip to the London Olympics, the Australian women’s cricket and soccer teams were allocated economy seats, whilst their male counterparts flew business despite being ranked lower in the world. There are also dozens of examples of women feeling unsafe at men’s soccer and rugby league matches.

I don’t bring this up to deflect attention from the AFL or point the finger at other codes but simply to note that, unfortunately, the nature of sport in general has made it difficult for women to be treated as equals. Solely blaming the AFL and its supporters for this ignores the bigger picture. Unfortunately, sexual assault and the devaluation of women’s labour are prevalent in society outside of sport too.

At work, a colleague asked me why I enjoy football so much and it made me stop and think. Sure, I like watching the skill of the game, and the passion and pain of pinning your hopes on that one team every winter. I could get that from watching just about any sport though.

What has taken my love of AFL to the next level is the sense of community, particularly amongst women. I look forward to the weekends when I can talk footy with my friends, and agonise over teams and umpiring decisions. I have formed close friendships with other women based on this passion. The personal importance of the game was highlighted a few weeks ago, when I ended a very tough week with an impromptu trip to the MCG and a nail-biting one-point win to Collingwood. My friend and I left the stadium elated, hugging and singing and feeling on top of the world. In her article, Erin Riley talks about the very real benefits of following football, and this bond is certainly one of them.

Absolutely, at least once a fortnight I shake my head and think ‘god, you people are dinosaurs’ at some comment or action made by a male player, a coach, a commentator. But would that make me give up the joy that AFL gives me and other women, and the hope that one day we will help change this industry for the better? Hell no.