the best and worst of the 2014 super bowl advertising 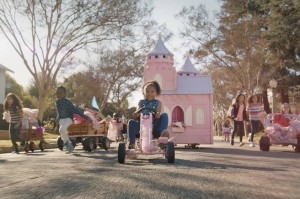 Here in Kangaroo-Land, we don’t really have the Super Bowl. So, for those of you not aware: it’s basically just America’s AFL Grand Final, but a lot bigger and more American (read: Gigantic, hugely commercialised, hopefully/probably involves hotdogs with mustard, chilli cheese fries, peanuts and whatever). The thing about the Super Bowl is not only is it ‘The Big Game,’ drawing a massive audience, but it is (for that very reason) the advertising event of the year, with companies, brands and businesses clambering for a spot to launch their newest, slickest, biggest ad campaigns.

Because once upon a time some Don Draper came up with the idea that ‘sex sells,’ the representation of women in Super Bowl advertising hasn’t been as progressive/equal as it could be. (Recall the infamous Audi ‘Prom’ ad from last year…) After the sexist shit show that was the 2013 Super Bowl advertising, us ‘rabid’ feminists (and proud!) all over the globe were anticipating something quite similar. Miss Representation even launched an innovative app #notbuyingit for the sassy modern feminist troll to call out All The Sexism in the media. Perfect for Super Bowl hijinks.

Yet this year was a bit different. While there was thankfully not as much blatant sexism as last year, there weren’t really many women to be seen.  Some notable highlights were the Coca-cola ‘America is Beautiful’ ad, a patriotic tune, sung in multiple languages and featuring Americans of various ethnic and cultural backgrounds, which alarmingly turned out to be quite controversial… Also Jaguar’s ‘Why are all the bad guys British?’ ad featuring the villainous trio of Ben Kingsley, Mark Strong and Tom Hiddleston, satirising yet revealing in the cultural stereotype of villains always being portrayed as British. Oh look! A lady villain-assistant named Mary, but where were the female villains? (Would the Dowager Countess count as a Villain?)

One would think women mustn’t be funny, smart, interesting enough to sell products in ways other than lolling languidly across them in their negligee. But amidst the sausage fest, I found two ads that I’d like to share with you, one typically horrid, and one sufficiently uplifting. And both deal with engineers.

The first, from Volkswagen goes like this: A girl and her dad are driving along when the car’s odometer ticks over to 100,000. The dad is all like ‘hooray’  because men like cars/machinery/speed and the girl is all like ‘whatever’ because girls like magazines/make-up/texting. Then the dad tries to interest his daughter in this feat of engineering by positing that ‘what if I told you that every time a Volkswagen gets over 100,000, a German engineer gets his wings?’ Cue montage of old white guys in lab coats sprouting angelic wings. In this little montage there is but a single woman engineer who is used only for a quaint joke about workplace sexual harassment. Great stuff. What this ad awkwardly does is imply that all German engineers are men. You know, because men are into science/technology/cars/machinery/speed, while women are into caring/humanities/magazines/make-up/texting. This is extra dumb considering the fact that studies show 85% of car purchases are influenced by women. Seriously, would it have been so hard to just say ‘a German engineer gets their wings’ ?!

Why are we still being fed these kinds of messages? While there are countless campaigns/initiatives encouraging women and girls to take an interest in ‘traditionally masculine’ areas such as engineering and computer sciences, those traditional gender roles which associate men with technology, culture and ingenuity (read: all things valued by modern capitalist society), and women with caring, humanities and domesticity, (or, as Raewyn Connell aptly called it ‘Kin work’) still seem to bubble away as an undercurrent.

Before weeping for the future of humanity, I bring you the second ad. You may have heard about Goldieblox, an awesome initiative to provide young girls with stimulating toys that go against the grain of pink-for-girls-blue-for-boys, while also subverting the trends of indoctrinating girls into domesticity and enforced hyper-femininity through toy washing machines, ovens and the like. Their Super Bowl ad blows all the sexism and lameness of the Volkswagen debacle out of the water.

In similar fashion to their previous viral ad, this new Goldieblox piece is set to the punchy tune of a Quiet Riot-esque ‘Come on get your toys,’ and features little girls rioting through the streets with their pink princess doll houses, washing machines, rocking horses etc with the rallying call of ‘More Than Pink Pink Pink, We Want To Think.’ They storm a child beauty pageant with the gusto of the 1969 Atlanta Miss America protest and enlist the girls into their cause. They fashion all their princess paraphernalia into a big pink rocket and launch it off, smashing the glass ceiling, smashing the patriarchy.

Ok, so not really, but after that Volkswagen bullshit, I was pretty happy to see this ‘charming, inspiring and groundbreaking’ little ad subverting the usual sexist conventions of Super Bowl advertising. Supporting and encouraging young girls to reject things that aren’t good enough and demand to be challenged, interested and involved is definitely a message rabid feminists like me want to see on the screen at The Big Game.