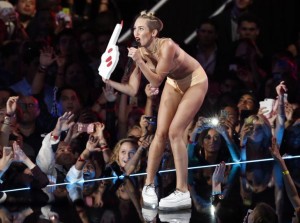 You’d be hard pressed to find a person who hasn’t seen, or at least heard about, Miley Cyrus’ performance at the 2013 VMAs. Without a doubt, it was full on, and made it clearer than ever that Miley no longer seeks the all-American image of her Hannah Montana days. The performance wasn’t to most people’s taste. If Miley’s aim was to shock, she succeeded. But the intense, ferocious reaction by people at large says way more about us than it does about Miley.

While the performance has been euphemistically dubbed ‘raunchy’ (any synonyms thereof) across traditional media, the less regulated language of social media has emphatically proclaimed her worthlessness. The performance was ‘vile’, ‘disgusting’, ‘desperate’ and ‘disturbing’; the performer ‘filth’, ‘trash’ and a ‘slut’. If you are reading this and happen to have branded Miley with one of those labels, let me ask you this: where on earth did you get the right to cast judgement on someone’s character (and, presumably, behaviour) because of a performance?

None of us actually know Miley, we’re privy to very few of her thoughts, feelings and private actions. Still, let us first focus on what we can infer: the VMA performance seemed constructed to further distance Miley from the character she’s played since she was a child, and to better reflect the type of music, dancing, clothes and ethos she’s currently interested in. This is fairly normal 20-year-old reaction to growing up, and little reason for complaint. Yet people seemed relish the thought of imparting their lazy moral wisdom on this young female celebrity. Being able to sit behind a keyboard and call Miley Cyrus trash clearly gives people quite a bit of joy, made all the easier by the immediate gifs and YouTube rips that nastily summarised those shameful qualities we’ve come to associate with a ‘trashy girl’.

Because surely Miley must be ashamed, right? She must be ashamed that she so overtly flaunted her sexuality on stage, and she must be ashamed that she likes her body. Women have always been made to feel bad when they’re not prim and modest. They’ve always been made to feel ashamed if they enjoy frequent, casual sex – or even imply as much by being free with their bodies. What we see in this Miley situation is collective slut-shaming and it is happening, quite bizarrely, based purely on a dance routine. It is beside the point to some extent, but in the collective glee of her public shaming, it was largely forgotten that her VMA performance has no relation to the number or regularity of her sexual partners.

Collective moral outrage can only exist with a collective idea of what is good and what is bad, and society’s skewed idea of how a woman should treat her own body seeps into this. We demand girls be ‘good’, but we don’t place the same restrictions on men. Robin Thicke was a willing participant in the most lascivious part of the performance, too. Yet he appears to have escaped all criticism.

Of course, when you look at Miley’s performance objectively, without the incredulous outrage, there are still worrying aspects. Miley appears largely in control of her career choices –  more so than she has ever been. But still, there is the question of whether she’s being unfairly objectified, which is a far more intelligent response than just calling her a slut. Certainly, her performance did little to refute the notion that a woman must shed clothing to sell records, and that their worth is tied to how they dance and what they wear, rather than their talent. If people want to discuss this, Miley shouldn’t be under attack for it. That needs to be a wider conversation about the specific pressure on female celebrities, and how that may influence young girls.

The real problematic aspect of Miley’s performance, and more widely, her current career decisions, is that while trying to emulate aspects of African-African culture, she appears to be casually mocking it. Her new music, and new look has been influenced heavily by hip hop, and while borrowing aspects of a culture is nothing new, her cultural appropriation sits uncomfortably. The twerking, the grills and the ‘Brooklyn Til I Die’ attitude makes it seem like Miley is trying to immerse herself in a culture she doesn’t fully understand, or respect. Sadly, this didn’t actually seem all that out of place at an award show which, while saturated in a hip hop aesthetic, saw every televised award given to a white person.  This is the real critique that should happen where Miley is concerned. It’s not one I’m qualified to make at all, and I’d wager it’s not one the angry Facebook mob is qualified for either.
I’m not saying Miley’s performance was great; I accept that seeing a young girl perform such a sexualised dance routine made many people cringe. What is unacceptable though, is people is tossing labels at her, labels that we give to people who don’t conduct themselves in a way we think is socially acceptable. Calling a 20-year-old a slut achieves nothing, besides revealing a prudishness and discomfort that makes for a repressive, judgmental society. Miley isn’t done growing up, and she may or may not regret her performance at the VMAs. But until then, it’s certainly not up to us to regret it for her.