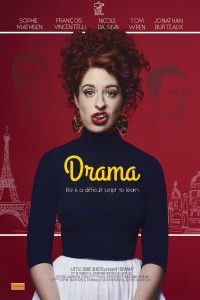 As I slink into my mid-twenties, I have feared that it would be time for me to leave behind my much-loved millennial dramas. As I find my way into stable maturity I would outgrow movies and television series like Girls and Please Like Me begrudgingly. But I need no longer worry if films like Drama continue to be made. Not only does it follow an awkward woman in her later twenties trying to make it in a creative field (yay), but it was made with a minimum requirement of 50% females in all departments (double yay for equality) giving the film an extra dose of charm.

To top off the swoon fest I am currently having with this indie flick, it is all set in gorgeous Paris. The film opens with everything a Paris-ophile like myself could want: Eiffel Tower glimpses, river banks, and quaint café-filled streets. Our heroine Anna (Sophie Mathisen, who also wrote and directed the film) has just arrived in Paris. With a striped shirt and cravat to boot she seems ready to take on the town. Anna is an Australian actress living in London who hasn’t had many auditions lately. She is excited to surprise her best friend Jean (Jonathan Burteaux) in his Parisian apartment, but has not arrived at a good time, as Jean and his partner Phillippe (Francois Vincentelli) are struggling with the slow death of Phillippe’s mother.

Despite the movie’s title, it is actually low on overt drama. The drama we see is not traditional movie drama, but the subtle kind that exists in secrets and silences between friends. Anna and Jean struggle with their love lives and relationship grief in this film, yet it is not these relationships that the viewer roots for, but the survival of a friendship. The film explores the simple delights in an old friendship in a beautiful way, through the reminiscing and the very real sense of history and familiarity between Jean and Anna.

The restlessness of these two friends has an Australian character. Anna in many ways represents many young Australians trying to “make it big” in a far off exotic country. She has become at home in Europe but is still not settled, as her dreams remain unfulfilled. As Anna struggles with language and with the veil of classiness in Paris her persistence shines. There is some sadness to this, but also a great deal of hope in the humorous way she tries to make her life work.

The film itself mirrors this positivity through its innovative production model. Created by sisters Sophie and Dominique Mathisen, the film was produced independently and supported by crowdfunding campaigns and private equity. Upon the film’s release date on the 17th of November, Drama will be made available both in cinemas and online via iTunes and Google Play. This approach – the ‘day and date model’ – has begun to be used in the US and UK and attempts to bring new films directly to the platforms viewers are using. Big name directors like Steven Spielberg have backed a similar idea in the US, and the team behind this film are bringing this new distribution technique to Australia. Drama’s cinema screenings will only go ahead however if enough tickets are pre-sold on ticketing site FanForce.

Another aim during the production of the film was to elevate women working in traditionally male departments. By having the 50% female minimum requirement (although this does not seem to translate to the principal actors on screen, this is balanced by having a female lead with the majority of the screen time), the Mathisen sisters have dared to be different which could be why this simple film feels so fresh.

Drama is a film with charm and wit. You could watch this film just to support its glass ceiling smashing agenda but thankfully the story is equally smashing. Plus, there is plenty of French food and cheese – again, I swoon for Drama.

Drama is out in cinemas and online November 17. You can find your nearest screening here.