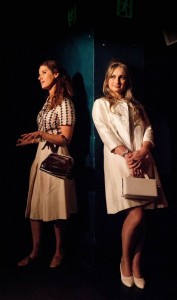 Blancmange Productions has done it again with their 2016 season opener The Punter’s Siren, on now until March 5th at The World Bar in Sydney.

The play is short, sweet, and to the point, and is accompanied by nothing more than simplistic staging, talented performances, and some of the most refreshing and wittiest play writing you’ll find this side of the equator. The Punter’s Siren is one full hour of fun and uproarious laughter, with that twinge of morality thrown in just for good measure.

The recipe-maker behind The Punter’s Siren is AWGIE award winning and NIDA playwriting alumni Gina Schien. She’s got a style often unmatched in the theatre industry these days, and seems to have a no-holds-barred approach to sex, gender, politics, and morality. It’s a breath of fresh air to hear the ways Schien tackles her seemingly impossible story, making us believe every minute of it to the very end.

The witty writing is accompanied by the pure acting talent of Jacqui Robson and Laura Viskovich, who both expertly weave their personas onto the stage and into our imaginations. Robson is especially hilarious and yet serious about getting things right (which she does wonderfully), and Viskovich is equally vivacious and professional about her approach towards a character that we both love and hate.

And then there’s the story itself. We learn instantly that Robson’s Helen is a self-conscious yet determined lesbian, and Viskovich’s Linda is a super friendly bombshell that’s up for anything a little bit naughty. They meet at Randwick Racecourse when Linda randomly taps the unsuspecting Helen on the shoulder. Helen is immediately enraptured by Linda’s curves and flirtatious moves. The story unravels as Linda tells Helen that on the next horse race they will make a bet and if the horse wins, they’ll use the winnings to get a hotel room for the night and spend a fantastic evening together. Helen’s horny side, the deep dark monster living within her, eventually agrees, and what follows is a hilarious and side-splitting turn of events.

Stephen Carnell has stepped in with his strong and consistent directing style, and it’s a delight to be able to sit back and watch theatre that you want to see over and over again. The overall combination of talent seems to be more like a TV show that I will follow season by season, yet here it is, a live theatre show, in the flesh, for the flesh.

Blanmange productions has a real knack for turning small spaces and short bits of writing into something enormous, worldly, yet still accessible. The Punter’s Siren is their seventeenth production in Sydney since their start in 2007, and they continue to grow and innovate like no other production company I have come across in a long, long time. I look forward to seeing what they come up with next.