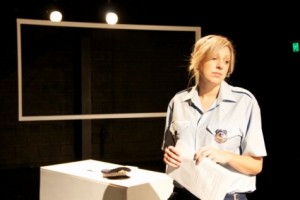 To have revealing photos uploaded onto social media without consent is a fear of many women and a nightmarish reality for more than you would imagine. This is the premise for Handle It, a one-woman play  that showed at The Street Theatre from March 13-16.  Kelsey, a ‘naïve’ first year university student wakes up after a big night out to find that naked images have spread like wildfire across the internet after being uploaded on Facebook without her consent. The story is further complicated when it is revealed early on that Kelsey has also been sexually assaulted and, not surprisingly, a torrent of vicious abuse and victim blaming by men on the internet and public commentators is unleashed.

Written, performed by Laura Jackson, Handle It is a very topical play that asks important questions: are women safe online? Why are we deemed responsible when our sexuality and bodies are exploited and ‘shared’ without our consent? Why do people behave so badly on the internet? And most importantly: if it happened to us, could we ‘handle it’? Should we have to?

As a play designed to provoke thoughts and spark conversation, Handle It is very effective and Jackson’s passion and commitment to making the internet a safer space for women is to be celebrated. This commitment extended to a short Q+A with the audience after the production ended, which was both enlightening and re-affirming: people care about this issue, and they want to help.

Jackson is fantastic in a multitude of different characters and showcases her confidence and versatility as a performer. However, although Jackson displayed obvious aptitude for writing interesting characters, a couple of the characters in Handle It  were a little too over the top and as a result, their role within the story was not as effective as it could have been. In a play where there already is not much room for to explore characters, it’s important to get it right straight off. There was also a plot twist that, whilst a very powerful moment and beautifully performed, for me confused the issue and detracted from the production.

Handle It’s set was simple yet effective, with particularly good use of projections, which enabled the depiction of online activity, and also very cleverly introduced two recurring characters who’s role played out completely ‘online’. I also particularly liked Jackson’s deliberate choice to tell the story from everyone’s point of view but the victims, which not only mirrored the way these cases are dealt with in reality, but forced this fact squarely into the audience’s consciousness, forcing us to think hard about what we would have done.

Handle It is a production that needs to be taken everywhere, and shown to everyone. As one audience member said at the end, it is particularly needed in schools, youth centre’s and anywhere else young people will see it. Despite my quibbles with some of the finer points of the production, Handle It is the best thing I have seen so far this year and the rave reviews Jackson has been receiving are well deserved.

Handle It is next showing at The Peacock Theatre in Hobart, 18th -19th of December.