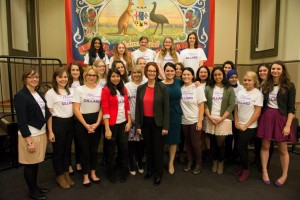 On Tuesday, Julia Gillard launched ‘Women for Gillard’, a campaign aimed at reminding women of Labor’s – and the Coalition’s – record on women’s issues. It was partly inspired by a similar campaign that Obama ran in 2012.

The Prime Minister raised a number of issues where she said she wouldn’t want to see women going backwards – including superannuation, paid parental leave and education.

But it was two of her comments in particular that have been splashed across the papers and repeated by the media.

Firstly that ‘women will once again be  banished from the centre of Australia’s political life’ under a Liberal-led government.

And secondly that ‘we don’t want to live in an Australia where abortion once again becomes the political plaything of men who think they know better’.

The Sydney Morning Herald called it a ‘ploy to attack Abbott’ and Julie Bishop called it a ‘distraction’. The media and some politicians seem to think that we don’t need to talk about it anymore, that abortion has always been a contentious subject. Feminists have long decried laws that prohibit women from taking control of their own bodies, of which abortion definitely falls under.

But hearing politicians, journalists and commentator’s talk – both the supporters of a woman’s right to choose and the anti-choice supporters – it would be sensible to assume that accessing an abortion must be fairly easy for a woman in Australia in 2012. After all, why would the anti-choicers be so up in arms about it otherwise? Their words evoke images of thousands of thousands of women each year taking the ‘easy’ way out and having abortions for convenience. Of a simple request, walking into a centre and walking out no longer pregnant. Like a 7/11, in and out, easy as pie.

In reality this far from the case.

Abortions on request are only available in two jurisdictions in Australia – the ACT and Victoria. In 2002, Jon Stanhope and his Labor government, with the help of the cross benchers, passed a law that made Canberra the first place in Australia that had legalised abortion in full. Think about that – it was only ten years ago that abortion was legalised in full in one tiny part of Australia. In 2008, Victoria followed suit. What this legalisation means is that a woman can request an abortion, up to 24 weeks, for no other reason than she does not wish to be pregnant. She can take control of her body and not be pressed to ‘prove’ why she can’t have a child.

For the rest of the states and territories it’s very different. In Western Australia and New South Wales, abortion is legal if it is determined that having a child would affect the woman’s health – mental and physical; if the foetus is likely to be born with defects; if the pregnancy was a result of rape; or if there would be serious personal, familial, social or economic consequences if they had a child.

In the Northern Territory, South Australia and Tasmania, it gets more difficult. In these places, abortion is only legal if it is determined that having a child would affect the woman’s health – mental and physical; if the foetus is likely to be born with defects; or if the pregnancy was a result of rape. So in NT, SA or TAS, too bad if you’re dirt poor and can’t afford a child. You can’t argue that financially you can’t afford it, unlike in WA and NSW. It also isn’t taken into account any personal, familial or social reasons why you wouldn’t want a child.

Then there’s Queensland. The only way you can obtain an abortion in Queensland is if the pregnancy will cause serious harm to the woman’s life. Abortions are not legal for any other reason, even in cases of rape, incest or foetal defects.

This means a doctor, separate to the one performing the abortion, needs to meet with the woman and decide for her if she should be allowed to have an abortion. Someone else makes an extremely important decision that could affect the rest of her life for her.

Labor is trying to say that they are the party women should vote for – they will protect women’s rights. But their record on abortion is not great in some states.

Under Anna Bligh’s Labor government in Queensland a Cairns couple went to trail for procuring an illegal abortion. Under a NSW Labor Government in 2006 Dr Suman Sood was convicted of performing illegal abortions, because she had ‘failed to adequately counsel the pregnant woman’.

To give them credit, it was state Labor governments that passed the ACT and Victorian abortion laws. But there is still a long way to go.

So whilst the Prime Minister wants to broadcast Labor’s record with women, it is obvious that both major parties have failed women on this issue. And the worst part is – no one is fighting for it. The way abortion gets reported in the media perpetuates the myth that abortion is easily obtainable by women in all parts of Australia. Something needs to change, and we need to make our voices heard if we respect a woman’s right to choose.

The Prime Minister talks about not moving backwards- but what about moving forwards? It seems no party wants to do that.