how has the australian media portrayed women in 2013? 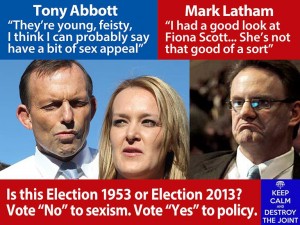 After the viral success of the Miss Representation project’s video on how the international media represented women in 2013, Lip has decided to apply the same analysis to Australian media. Perhaps unsurprisingly the international trend of gender discrimination is also apparent in Australia, with mixed coverage being provided by the media on key issues.

Given the tumultuous nature of the Australian political context in 2013, it seems fitting to start any analysis of the year that was by looking at how the media dealt with women in politics.

During her term as Prime Minister, the barrage of sexist media coverage against Julia Gillard ensued in 2013. Standouts include the infamous questioning of the sexual orientation of the then Prime Minister’s partner, Tim Mathieson, by 6PR radio host Howard Sattler, who deemed it appropriate to repeat rumours that Mr Mathieson must be gay (because he’s a hairdresser, duh). The host was later sacked, and memes depicting the hypothetical scenario of Mr Abbott being asked the same question about his relationship went viral.

Sadly, this sort of treatment of the Prime Minister was not new for 2013. Moreover, outside of shock jocks like Sattler, other mainstream media was generally less open in its sexist treatment of Ms Gillard. But, as argued by Independent Australia, these media outlets ‘raised important ethical issues just the same.’ The article goes on to note that ‘the most common [issue]… concerned the passively neutral way in which they covered the grossly disrespectful public attacks on her.’

Indeed, whilst media cannot be accountable for the comments or actions of others that they may report upon, they can affect how those actions are reported. By having most mainstream media choosing to give airtime to these actions without providing the necessary context to de-legitimise such crudity is where the media failed in its dealings with the former Prime Minister.

Outside of Ms Gillard, there was also much coverage of women in the political campaigns surrounding the election. Tony Abbott’s daughters became important campaign figures during the election, often flanking Mr Abbott at public appearances and being used to filter comments that Mr Abbott had a ‘women problem.’ Whilst some media happily accepted these new additions to the campaign trail, others questioned the involvement of the Abbott daughters as nothing more than a ‘stage managed spread.’

Then of course, who could forget Mr Abbott’s video election message to the Big Brother house where he stated that the housemates should vote for ‘the guy with the not bad looking daughters’.

Regardless of intention, it would appear that women were still being used here as a visual cue to influence voters, reaffirming their role as a periphery to politics rather than being part of the action. This was affirmed when the current Liberal government came into power and announced that their cabinet would only contain one woman. Elements of the media quickly pointed this gender disparity out and criticised the government.

The Labor Party too was not without its own sexist jeers, with Tony Burke referring to the now Speaker of the House Bronwyn Bishop as the cruel witch, Dolores Umbridge, of Harry Potter fiction fame. Again, whilst this comment came from outside the media, coverage of this by the media often failed to address the derogatory intent behind the comment and tackle the issue head-on.

2013 was a strong year for women’s sport, with stand out performances from the Australian women’s cricket team’s tour of the UK and champions such as Ellyse Perry continuing to play both soccer and cricket for Australia on the international level. Hurdler Sally Pearson equalled her season best time to claim the silver medal in the 100 metre hurdles at the world track and field championships in Moscow. Meanwhile Sally Fitzgibbons was named Sportswoman of the year, (a fair cry from having a horse take out the title in 2012).

However despite these achievements, media coverage of women’s sport remained low in Australia. The Australian Sports Commission reported that women in sport made up just nine per cent of all sports coverage in Australian television news and current affairs. The report also detailed that in order to gain media coverage, women generally needed to win in their respective field, whereas male sport received coverage regardless of the result.

The importance of media coverage for female sport is something that has been understood by the Australian Sports Commission for some time: ‘the reason for this is simple. Sport and the media are two of the most powerful influences that affect how Australian society works. They are also intertwined in that both affect how people think and shape ideas and emotions.’

As media fitness personality Michelle Bridges notes, ‘It’s an odd world… While the blokes are getting the headlines for breaking curfews and messing around with illicit substances, the women seem to be quietly achieving great things in a cloud of secrecy.’

Despite generally low coverage of women in sport, some media such as Women’s Health magazine actively promoted female sport with their ‘I Support Women in Sport’ Awards playing an important role in celebrating the successes of Australian sportswomen.

2013 was a strong year for Australian arts. Australian film The Sapphires was highly acclaimed, both domestically and internationally. However, there was the, now notorious, cover art debacle that saw a US distributing company changing the cover to focus on Chris O’Dowd and leave the female leads on the periphery.

In film generally, Australian women are leading the world in terms of representation in film creation. Australian women make up 18 per cent of film directors, 34 per cent of producers and 24 per cent of screenwriters. However, at this years’ Tropfest short film festival, just only a handful of the 16 finalist films were directed by women, a fact that was somewhat eclipsed in the media by the arguable transphobia of the winning piece, Bamboozled. Yet whilst the figures still remain low, these are an improvement on the current international standards.

So, like it was for the international stage, Australia has still has some ground to cover in terms of its representation of women for 2014. Because, again, Australian women and young girls deserve better.
What did you think of the way the Australian media represented women in 2013?
Remember any particular events that really got you going?
Share them with us in the comments!

One thought on “how has the australian media portrayed women in 2013?”