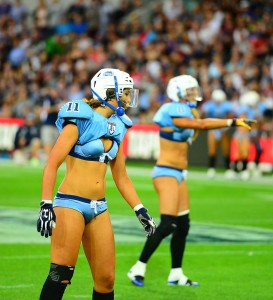 Being the feminist that I am, I’m all for calling out and challenging sexism. However, you can’t tackle sexism with sexism. In a patronising twist of events this is exactly what Collective Shout, an anti-sexism activist organisation, has tried to do.

Legends Football League (LFL), commonly known as Lingerie Football League, came to Australia from the USA last year. The first season was broadcast on Seven’s ‘blokey’ channel 7mate. It is women’s gridiron with an overwhelmingly sexist marketing strategy. Last year Collective Shout petitioned against televising the game and recently Sydney Morning Herald reported it lost its broadcast deal. It is unclear why this came about and whether it had anything to do with Collective Shout’s petition. Regardless, they shared the news proudly on their Facebook page.

Collective Shout rightly raised concerns about the sexist nature of the game. This includes rules surrounding the ‘lingerie’ style uniform and contracts requiring players to ‘agree’ to accidental nudity. Collective Shout’s co-founder, Deborah Malcolm, reported disturbing insights into the atmosphere of a game she attended. Nudity of the players was replayed on the big screen. Spectators (men) were invited to chase and tackle players for entertainment. A blow up doll was passed around. The commentator pointed out ‘[t]hey are all gorgeous girls, can’t wait to watch them’, making no attempt to hide that it was all about men getting ‘eye candy.’

I wholeheartedly agree that sexism in the LFL must be addressed. Most of all, I detest the way this type of marketing teaches boys (and girls) that a woman’s purpose is to entertain and pleasure men.

However, the approach taken by Collective Shout and community petitioners has done nothing to advance women’s rights or their representation in sport. The rhetoric used is at best utterly unhelpful and at worst just as sexist as the men passing around blow up dolls, only with a different spin on it. Online public discussions show how LFL players are being constructed in demeaning and sexist ways. There are the two prominent themes:

1. The women are passive, pathetic creatures with no capacity to respect themselves or to make decisions about their own bodies and careers. They are silly, vulnerable and need the intervention of well-meaning community members who know their interests best.

‘It just blows my mind that the girls involved in this farce are so deluded. I’m speechless and dumbfounded. They try and look tough wearing skimpy outfits. Ridiculous, and it SCREAMS sexism’ (Reader comment on Collective Shout’s online petition).

‘Effing ridiculous – and very skanky. Absolute joke. Are you girls idiots? You obviously have NO self respect.’ (Reader comment on Collective Shout’s online petition)

2. LFL players choose to disrespect themselves by wearing ‘naughty’ uniforms. They are worthy of recognition only when they dress like the respectable male players. They are poor role models for girls and young women, who are vulnerable and need protection from the influences of poisonous, dirty women.

‘Is this HONESTLY what you’d want your daughters to aspire to? I know I sure as hell wouldn’t want mine to!… We don’t have to dumb ourselves down or get naked to be respected ladies!’ (Facebook user comment to Collective Shout)

‘They are putting themselves in the situation… If they want to be recognised as sportswomen and have respect for what they do then they first need to respect themselves’ (Facebook user comment to Collective Shout).

Indeed, the language used in Collective Shout’s petition itself is problematic:

‘While there are so many legitimate women’s sporting leagues that struggle to get sponsorship and media attention, and while the achievements of female athletes are already unreported in the media, it is appalling that Channel Seven would disregard clothed women in sport in favour of woman playing in their underwear.’

I think Collective Shout tried to point out that women should not be sexualised in order to gain the media representation their male counterparts enjoy. This is absolutely right. But the execution was all wrong. They imply LFL players are not legitimate sportswomen because of the attire they wear. Although LFL players are not overtly blamed by the organisation, the scrutiny has landed mostly on them rather than on men’s degrading, sexist behaviour, and the overall patriarchal system that created the sport.

Does anyone give a shit about what the players think and feel? It seems in the scheme of all this sexist rhetoric everyone has forgotten that they are people too. The comments on the petition by self-identified LFL players demonstrate they are feeling degraded and unsupported from all directions:

‘It’s pretty fucking sad that we have to wear what we do to play a sport but it’s the only way we can play this sport. We’re not allowed to join men’s teams and there is no women’s league. Stop judging us and maybe come down to a training session and see what we do.’ (Sarah – comment to Collective Shout online petition).

It speaks volumes, doesn’t it? Let’s get a few things straight:

LFL players do not identify themselves as sex entertainers. So let’s all stop referring to them and treating them as such, regardless of their uniforms.

The backlash against LFL has achieved nothing of real significance in the way of change to sexist LFL policies and marketing. Now LFL won’t be broadcast, but the sexism within the game continues. Actually, the competition is expanding with a new team called All-Fantasy. The only difference now is overt sexism is less visible to the public. The opportunity for widespread community support of these women to get the respect and conditions they deserve has pretty much been missed. I simply can’t see this as a ‘win’, especially as women have been hurt and degraded in the process.

I also can’t get past the double standards. There are major cultural problems in men’s football. It promotes a distorted representation of masculinity as ‘tough’, aggressive, and violent. Punch-ups on field are common and cheered on enthusiastically by the crowd. Sexist advertising is dotted throughout the televised games; the consistent message seems to be that women are whiney bitches who forever keep fun-loving men under the thumb.

The glaringly obvious consequences are countless reports of football stars raping, sexually assaulting and sexually harassing women. Perhaps one of the most memorable cases was ‘Clare’, who opened up about being gang raped on ABC Four Corners in 2009. She consented to having sex with two NRL players, Matthew Johns and Brett Firman, in a hotel room. Shortly after, around ten football players entered the room and gang raped her.

To the best of my knowledge, there has never been a campaign targeted at removing men’s football from the television to protect young men and boys from the harmful influences of violent football culture. Is it because men are ‘tough’ and can take care of themselves? Or perhaps men are excused because of the pervasive myth that they ‘can’t control themselves’ yet are permitted the right to power and dominance.

I want to see a much stronger emphasis on reforming the LFL, as Collective Shout has done regarding sexism in men’s AFL, and/or a proactive campaign to raise the profile of sportswomen that demands equal and respectful media representation. Comments by LFL player Chloe Butler, reported in the Townsville Bulletin, suggest that LFL players also hope for reform:

‘They have changed the outfit to be more of a running outfit with no frill or anything to slowly make the move away from that (the sexy) part of it and rebrand it and slowly gain respect as a sport.’

In the end the LFL sportswomen lose out most. They are punished for being everything our patriarchal society tells them to be: conventionally attractive, prettied up with hair and make-up, dressed to suit the male gaze, and obliging to men’s ‘needs’ (wants). Yet sportswomen are punished just as harshly when they reject these pressures. Regardless they are not properly recognised by the public or represented in the media. We need campaigns that have the capacity to take on the complexity of these issues. We don’t need over-simplistic patronising campaigns that reinforce patriarchal structures under the guise of anti-sexism.

6 thoughts on “tackling sexism with sexism: collective shout and the lingerie football league”