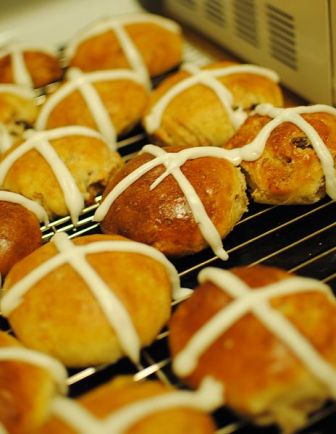 Chocolate, Cadbury Creme Eggs (they deserve to stand alone). Hot Cross Buns. Those are the three most important things about the day, right? Even if you have other priorities, chances are that a hot buttered Hot Cross Bun is definitely an indulgence you have one or twenty times over Easter.

I thought it would be an amazing post to let you know how these little buns of joy came into the world,  but there are so many conflicting theories that it started making my head spin and go Frey – just quit researching, and eat one! (Okay, it said to eat five).

Take all of the below with a grain of salt. For all I know, someone came up with whatever was in their hut and liked the look of the cross (it’s symmetrical, I get it).

But aesethics aside, there are two strong contenders as to why there is a cross on the buns (and it’s likely both) –

1. The symbol of the cross predates Christianity, just as small cakes and breads full of spices and fruits can be traced back to Ancient Rome. Some believe that spiced buns marked with a cross (to symbolise the change of the seasons and passing of the moon) were exchanged during Solstice and other Pagan holidays.

2. In the Medieval era, many breads and cakes – not just what we have come to know as Hot Cross Buns – were marked with the cross prior to cooking in order to bless the buns and thank God for the nourishment they provided.

1. The Saxons worshipped Eostre, the Goddess of light and fertility. It’s thought they ate buns marked with a cross in her honour, and that Easter was named after her.

2. In the Elizabethan age, they were nearly banned due to unease in the Catholic and Protestant religions. There seems to be conflict around who and why the buns were deemed “dangerous”, so let’s focus on the positives and applaud Elizabeth I who passed a decree allowing them to be sold on Good Friday, Christmas, and for funerals.

There have been some superstitions surrounding Hot Cross Buns

So, on this Good Friday, where can these delicious rolls of joy be found? There is, of course, Baker’s Delight, who roll out consistently yummy ones, and most of the major supermarkets do several varieties, including Gluten Free ones.

But if you happen to be close to Parramatta in Sydney, you’ll have to try my favourite of the season from Sweet Street (run by Leanne Beck, who is also responsible for all the delish sweet treats at Sweet Infinity). The buns are bigger than your usual variety, and are full of an irresistible mixture of spices. Their varieties include spelt, rum & raisin, and chocolate. While this Good Friday post might leave it too late for a Parramatta trip this weekend, make sure any of you Sydneysiders check out her Sweet Infinity stores at Riley St (Woolloomooloo) or QVB store – her Lemon Meringue Tart makes my tastebuds throw a party. But of course, that’s another story…

So, Lipsters, go toast yourself a Hot Cross Bun, smoother it in butter, and have an incredibly, happy, wonderful, safe Easter.