in brief: gender neutral toy packaging for marks and spencer 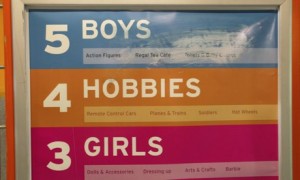 By Spring 2014, all toys sold at Marks & Spencer will be completely gender neutral. The response comes after a series of complaints from customers claiming that the store markets items in accordance to stereotypes.

The rebranding was made public when Marks & Spencer responded to a tweet from labour MP Stella Creasy. The company tweeted ‘Hi Stella, we’ve listened to our customer feedback and by Spring next year all of our toys will be gender neutral.’

Particular complaints stemmed from a range of toys called ‘Boy’s Stuff,’ which included toy cars, planes and dinosaurs. The description on a pop-up fire station reads ‘this pop up fire station is perfect for little fire men everywhere.’ Similar descriptions adorned the packaging of a watch and joke book. ‘Boys know all the best jokes and here are 500 crackers to keep you ahead of the girls,’ reads one of them.

All of these toys are to be rebranded with a simple logo. Similarly, the ‘Little Miss Artsy’ range will become ‘Poppy and Blue.’

The past year has seen a 60% drop in stores separating toys into different sections depending on gender. Campaign group ‘Let Toys be Toys’ said that reports show that one fifth of stores are still separating toys by gender rather than genre. The group, which began in November 2012, continues to call on retailers to put a stop to gender stereotyping.

Inspired by the UK organisation, a new campaign group has emerged in Australia. ‘Play Unlimited’ are fighting back against Australia’s gender-specific marketing. The group includes parents from Melbourne, Sydney, Brisbane and regional NSW. They aim to target stores like Toys ‘R’ Us, Target and Big W. Spokesperson Thea Hughes said that ‘the toys seem to be divided along old-fashioned, traditional gender lines – the kind we have hopefully moved on from in 2013.’

‘In the same way that parent’s don’t wish to limit their daughter’s play, imagination or future to dolls, kitchens, make-up and pretty dresses, I refuse to limit my sons to soldier games and lawnmowers,’ said Hughes.