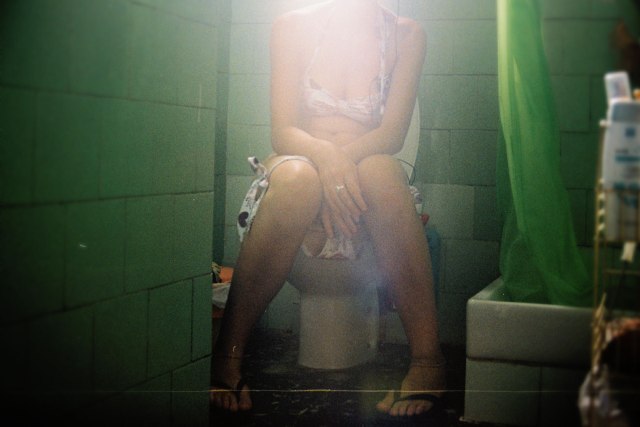 Local supermarket, 8pm. I’m in tracksuit pants and no bra. The checkout operator smirks as he puts my items in a plastic bag. Two blocks of Caramello. Panadol. Tampons. The glint in his eye says: ‘I know about your unwelcome guest’. The answering glint in my eye says: ‘If you don’t wipe that grin off your face I’ll deck you right here you little shit because I just had to pay $10 for a non-negotiable hygiene product*’.

Rewind five minutes to me lingering shadily in the hygiene aisle. I want to choose the best value product but I have to keep switching my gaze to the neighbouring hair products so my brisk fellow shoppers won’t know that my ovaries are having a not-pregnant party. I’m also struggling to justify spending half of my remaining $17 on little sticks of cotton just because their plastic wraps are printed with ugly purple tartan, but the only alternative is a pad the size of my forearm that I know from experience will make ominous scrunching noises every time I walk. I go with the tampons.

For the next five to seven days, my body – normally so predictable and cooperative – regresses to pubescent disobedience. It cheats and lies. It bloats and cramps and sweats and breaks out. I’m constantly on the verge of either shouting or crying, and I want nothing more than to have sex, which is made difficult by the whole vaginal-bleeding thing. Enter hormonal turmoil, a tempest of oestrogen manifesting in behaviours including but not limited to the following:

This barrage of emotion, a.k.a. PMS, is a thing. Probably not everybody does it as melodramatically as I do, but I have a naturally melodramatic disposition, so whatevs. What PMS does do is transform the perception of our periods from a pretty fucking magical natural cycle into a crazy-bitch mentality. I’m hardly disapproving of it, but that doesn’t mean it’s cool.

There’s something about the combination of genital bleeding + crazy behaviour + physical discomfort that tells us that periods are weak, yo. It’s downtime. Call in sick! Especially if your boss is male! Tell your lecturer you had “women’s troubles” and they will hurl an extension at you like some kind of repellent! Eat chocolate on the couch without caring about your weight! Now is the time to look after yourself, ladies! This is the kind of respite celebrities have when they’re pregnant and don’t have to pretend they hate cake and live to eat kale! You can admit you don’t even know what kale is because you have your period! Plus sanitary products totally double as cat toys/armour for your boyfriend to play with when you’re not at home! Right?????

Wrong. You should be wearing your period like a badge of pride. Walk around singing Helen Reddy and telling people that just because you’re a little bit teary doesn’t mean that shedding your endometrial lining isn’t a totally cool feature of the female body. I mean, isn’t there something earthy and mystic and sacramental about the whole thing? My uterus is doing its job. It’s reminding me that it’s there, that it’s ready to incubate my offspring when I’m ready to spawn it. It’s given me fair warning: sore boobs, that time I cried watching The Block, a little nausea. My body communicates with me and I communicate back. I let it practise what it’s made for: the contractions that right now are just redecorating but one day will expel a slimy little human right out of my treasure chest. Too gross? Don’t care. It’s nature you guys.

*I know there’s an alternative: the menstrual cup. I simply haven’t been brave enough to try it yet.

4 thoughts on “girl versus period”