Lip lit: not that kind of girl 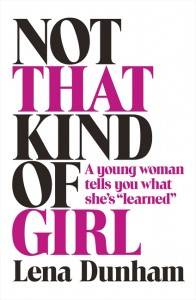 Not That Kind of Girl is a memoir, a compilation of twenty-eight personal essays that has set fire to a media storm. This is mostly due to the sexual content—at one point Dunham describes her seven-year-old self discovering sexuality via an exploration of her infant sister’s genitalia, which she explicitly describes as something a sexual predator would do. A few chapters after this, she writes of a sexual encounter akin to rape, although it is not labelled as such until much later, and by somebody else.

National Review writer Kevin Williamson goes so far as to call the writing of this encounter a ‘gutless and passive-aggressive act’. Dunham, after all, never filed charges, but is quite happy to condemn ‘Barry’ on paper. In interviews, Dunham has been quick to downplay the extremity of this maybe-rape—which, considering her bold views on feminism, is a strange contradiction. And it is this this double standard which has caused most of the talk.

I came to Not That Kind of Girl with all this buzzing in my head. As a 26-year-old memoirist, she is often accused of a certain generational arrogance that Williamson calls a ‘bloated sense of self’, which furthers the lazy opinion of a narcissistic generation. Admittedly, Dunham had a privileged childhood. Adversity is expected in modern life writing, and on this note she fails to deliver. Despite this, the writer is capable of producing a memoir that is funny, insightful and honest.

A huge portion of the appeal lies in her revealed imperfection, her willingness to present herself without hiding flaws. So many modern autobiographies skip on the awkward humiliations of everyday existence—Dunham, in contrast, is all too eager to describe every stain on every dress, the time she vomited all over a playwright’s carpet; the time she dealt with a hangover by lying on the bathroom floor and consuming half a block of cheese. In these moments, as filmmaker Miranda July describes, we find ourselves ‘shivering with recognition.’ Dunham’s got this remarkable way of finding the most vulnerable part of the reader, and letting them know it’s okay.

She is also seemingly fascinated with herself in the third person, which lends well to her self-deprecating tone. At one point she describes her past self: ‘There she goes, backpack on, headed for the subway or the airport. She did her best with her eyeliner. She learned a new word she wants to try out on you.’ Dunham invites you close, points at her self and says, ‘She’s ridiculous. Let’s laugh at her.’

The book’s structure is interesting, too—the essays often consist of unsent emails and lists, flicking back and forth between subjects and timelines. Dunham will drop a single name, with enough flair to make us curious about this person; what a joy it is, then, to discover later on that she’s allocated them an entire section in her book.

The writing bursts with energy, with a sense of love for the words. Reading it feels like riding a horse blindfolded—you don’t know where you’re going, but the rhythm takes you there before you can refuse.

2 thoughts on “Lip lit: not that kind of girl”