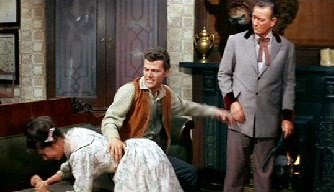 Before 50 Shades of Grey inspires you to go paddle shopping, I feel like I should butt in (see what I did there?). It’s actually kind of hard to tell whether spanking is:

(a) the mark of a free woman who apologises to no one in search of her own pleasure, or

(b) the patriarchy rearing its ugly head, infantilising women and (in heterosexual relationships) putting a man in a position of power.

Spanking inspires feelings of servitude and helplessness – that’s what’s so sexy about it. Or not, depending on which camp you’re in. While that helplessness may be mixed in with love for your partner and a keenness for something new in the bedroom, a man lusting after a woman’s servitude is nothing new. In fact, it’s pretty old hat.

Spanking has had a rich history. In the 18th century it was used as a disciplinary measure for sailors. Back then it was called cobbing. In the 19th century, “paddling” was used in America to punish slaves in a way that wouldn’t scar them and reduce their value, which may be the worst thing I’ve ever learnt.

The 20th century spank had a different purpose (other than military initiation): discipline in the home. What was once called “domestic discipline” was actually a form of punishment administered to wives and children. It was thought, and unfortunately in some circles still is, that it is a husband’s duty to put his wife and children in line. This is abuse and it is not okay.

But despite this, spanking as a form of punishment has been widely depicted in popular culture. Lucy’s husband on ’50s TV series I Love Lucy spanks her on multiple occasions for her “meddling”. Lucy yells, tries to get away and holds her butt in pain as the audience laugh track plays.

Even Elvis spanks on screen, in the 1961 film Blue Hawaii. He spanks a woman after she attempts suicide to prove he “cares” enough about her to discipline her. She tries to get away and Elvis proves he should be doing the Jailhouse Rock for 5 to 10. In the 21st century, spanking has taken a turn for the erotic. An episode of The Big Bang Theory, which aired in 2012, depicts a consensual scene where Amy declares she has been a “bad girl” and needs to be punished by boyfriend Sheldon. Spanking ensues and the audience laugh track plays again. But this time, we’re laughing at Amy’s strange sexual desires, which is a slight improvement on the gender equality front. Domestic discipline has inspired consensual role-play spanking. We’re now role-playing as the oppressed and abused. Our sexual proclivities have been born out of violence dressed up as laugh-out-loud moments from the ’50s and ’60s. Women are no longer depicted as writhing on a man’s knee, yelling and trying to get away. Nowadays we provide consent and ask for it to be harder. The bad girl rhetoric infantilises women while the role of the discipliner paints men as aggressive. Domestic discipline and erotic spanking cannot exist as entirely devoid of one and other. They are intertwined in a history of violence and oppression.

Spanking can feel empowering: it allows women to demand sexual satisfaction. But we need to examine why women feel comfortable asking to be spanked but may struggle to, for example, let their pubic hair be free. Spanking does not challenge the status quo of male dominance. It reinforces it. So perhaps it’s best we move on and leave that history behind. (Sorry, I couldn’t help myself.)